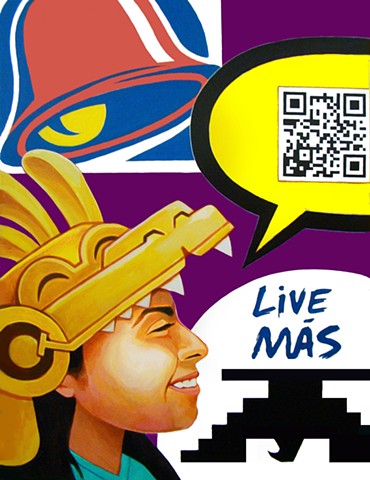 I have thought about adding on a special function to some of my paintings. In this particular painting I include a QR code which serves as a link to a particular article that shares a concern for a fading demographic. I created this painting as criticism and humor about how a culture is not static but subject to change. In the foreground I placed a younger person with a hat/headdress of an Aztec deity. The hat resembles something that would be more similar to theme park merchandise. I used an image of the united farmworkers logo which is also synonomous with Chicano culture and turned it upside down to resemble the Aztec worshiping temples. The use of Taco Bell graphics and slogan adds to the idea of change, repulsion, and humor in the situation of Mexican American identity.